The stories of Middle-Earth are all epic fantasy quests, they thrive on the presence of villains to drive the narrative. Without strong villains it is unlikely that the Lord of the Rings or the Hobbit would ever have found the huge audiences that they have today. There are very few movies or works of fiction that can match the sheer breadth and variety of villains that J.R.R. Tolkien created. That is why I have thought it only right to reduce this plethora of work into a trivial Top 10 list. Let it Begin!

I remember when Shelob first came on screen in my first (of many) viewing of The Return of the King, there was an audible whimper from the audience, most noticeably the female contingent. Shelob’s inclusion on the list come down to one simple fact. She’s a giant spider. If a fight with a giant spider isn’t enough to get you excited, nothing is.

It’s a shame that Tom, Bert, and William are so low on this list. In the novel Bilbo’s encounter with these characters is perhaps one of the highlights. However in An Unexpected Journey their segment wasn’t as strong as it might have been, this being one of my main gripes with the movie. However they were still entertaining enough to make it onto the list. The three trolls are more comic relief than villains and act well as a first test for the unexperienced Bilbo Baggins.

Surely not! The central villain in the Lord of the Rings trilogy this far down in the list? Yes. The truth is that Sauron always seemed too passive to be a truly great villain. Though his presence is felt throughout and his various incarnations are visually striking, he ultimately has very little direct influence on the action outside of the prelude.

This guy? A better villain than Sauron? No. But, in my opinion, more important. Gothmog is on this list for one moment alone, and you’ll find that here. That moment when he visibly realises he can’t stop the charge speaks volumes about what is happening in the narrative. The Battle of Pelennor Fields is the turning point in the trilogy. For around 7 hours at this point in the trilogy we have watched our heroes constantly struggle and suffer at the hands of cruel orcs and the like. Gothmog represents all of them. There is no moment in the series more satisfying than that look of realisation of his face. The tide is turning. 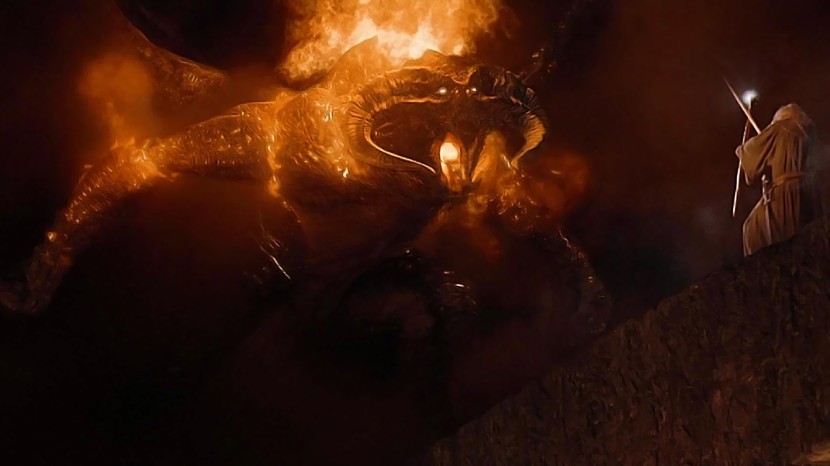 The Balrog was the first giant villain in the Lord of the Rings series, as such, for those who had read the books, there was a sense of anticipation for how it would be handled. As with everything in Peter Jackson’s adaptations it is whole-heartedly faithful and extremely ambitious. The effects were truly staggering when The Fellowship of the Ring was released, and the confrontation between the Balrog and Gandalf became the centrepiece of the film.

5: The Witch King of Angmar

In many ways the Witch King is the embodiment of Sauron in the Lord of the Rings trilogy. He is the character that most directly affects the whims of his master and quite often he is the character who impedes the fellowship the most. He near mortally wounds Frodo (but who doesn’t) and kills King Theoden. Unfortunately his legacy is marred by a rather swift and unceremonious exit (built up much better in the book).

This may be the most personal of all of my choices. When The Fellowship of the Ring was released, I was only 11 years old. Needless to say I liked my villains simple. Pure evil, seemingly unstoppable, and scary as hell. Lurtz is exactly that. He is probably the main antagonist through the first film and is unrelenting in his pursuit of the Fellowship. As a kid I hated him, and thats exactly what I needed to make me buy into the series. Looking back now, he’s hardly the most complex or interesting of villains, but I still have a soft-spot (really?) for him.

If we are honest, Middle-Earth isn’t exactly a place filled with morally complex characters. Things are generally black and white here (sometimes quite literally), as an audience we are told time and time again who to route for and who to hate. So Boromir is something of an anomaly. Some may argue he isn’t a villain at all, something I could agree with to an extent. But there are times when he impedes the fellowship so I’m going to let it count. Boromir’s stories is both of a man’s descent into madness and greed, and his later redemption. It is perhaps the great performance of Sean Bean that helps give weight to the characters arc, and in the end it is the believability of his turn to darkness that makes him such a striking villain.

See my review of The Desolation of Smaug here to see exactly whatI thought of Smaug. But, in the words of Bilbo Baggins, ‘Truly songs and tales fall utterly short of [his] enormity”. It was tempting to put Smaug at the head of this list, but really it is still to be seen exactly how well he is handled in the trilogy’s final instalment.

This can’t come as a huge surprise. Gollum is the head of this list for similar reasons as for Boromir’s inclusion. He is morally complex and fantastically played by Andy Serkis. Gollum however swings the gamut. At times he seems benign, completely innocent and harmless. At others he is truly evil, covetous and murderous. As an audience it is hard to decide whether to pity him or hate him. I remember watching The Return of the Ring when he fell down the pit in Shelob’s lair. His (presumed) death was met with riotous applause and cheering from the audience. My immediate reaction was to join in, but even then I felt almost mournful that (as I thought) it had to end that way. Unlike any other villain in either trilogy, Smaegol becomes as integral to the story as Frodo or Gandalf, that is why he is the best villain in Middle-Earth.